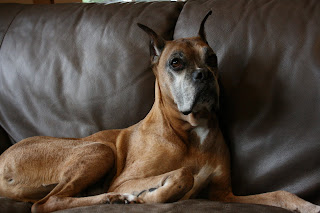 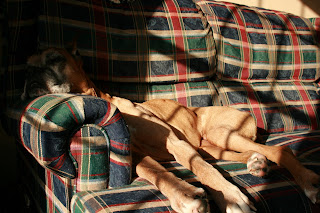 Since all week it has been pretty much me and the dog around here, I thought it high time he make an appearance on the blog. Tyson is a Boxer and he is almost 12 years old. Yes, he is old. Yes, he is grey. And yes, he still acts like a toddler.
Tyson is the son of McKenzie who was our first dog. She died two years ago and I miss her every day. She was our first--baby or dog--and we spoiled her rotten. We were determined that she be a good dog and enrolled her in obedience school. And she failed twice. In the end, she was a good girl and obedient to the core. Her son, well, that apple fell far from that tree.
Okay, my husband would disagree with me because Tyson listens to him. Very well actually. He will give Dan the evil eye sometimes and heave a big sigh when told to stop or to do something, but he will do it. With me, when Dan is out of the house--even to walk to the mailbox--Tyson needs to share everything with me. LOUDLY. Dan says it is because I am a pushover, but I have tried. People, I have tried to use the firm voice or the Dog Whisperer Rules or any other pull-me-up-by-the-straps firmness that I can muster. He still barks at me.
I should rephrase. His barking is not random. He really is telling me something when he speaks. Here is the common theme,"I see the treats on top of the fridge. I know that you gave me one as you always do when you come home. But it is an hour later and I have slept on the couch and I have decided that I would like another." And so on, until he has decided that he wants my dinner or he wants to walk or he needs to go outside or he wants to lay on the deck in the sun. Did I mention he does this LOUDLY?
Don't get my wrong. This boy is my dog. And of course that is why he barks. Yes, I am indeed a pushover. Frankly, when he was a pup I was too tired to argue. He was born six months before my son and during Tyson's terrible puppy stage, I was learning the schedules of a newborn. Tyson probably had to speak loud to me in order to get my attention as I fed Zach and slept on the couch between feedings. No wonder he's like this.
He doesn't bark all the time though. The other thing he does quite well these days is sleep. Poor guy, I guess getting old bites. When he was a puppy and I was still pregnant, I was told to lay on my left side to reduce the swelling that I was beginning to show all over my big self. Guess where Tyson decided was the prime seat in the house? In the curve of my leg by my knee. It's still his comfort place to this day.
Crazy creature that he is, we wouldn't trade him for anything. In fact, knowing that this is probably our last year or so with him pains me. I can't think about it or I will cry. I never had a dog growing up and now I cannot imagine my life without that furry bundle of joy no matter how much he drives me crazy. He's been comfort when I was sad, kept me warm on many a cold Michigan night, made me belly laugh at some of his antics, and kept me company when I was lonely. Our little Bubba is my honey dog and I don't know what I would have done without him all these years.
What's that? Oh, I'm sure he wants another treat. Sorry he's so loud.
Posted by Twila Bennett at 9:56 PM 1 comment:

Twila Bennett
Rockford, Michigan, United States
I am a woman. Hear me roar.